Tuesday, September 4, 2007, I was a very ripe 37 weeks, 4 days pregnant with my twins and in my doctor's office for a routine non-stress test. Brenna, known to them as "Twin A," failed the test so my doctor decided to send me to get an ultrasound done. He didn't seem too worried but thought it was best to go in and have the test ran again along and with an ultrasound since there were none available in-office.  It was a short drive to the hospital and I checked myself in at OB triage. I had let my mom know what was going on and she had left work to come join me. We sat in the waiting room chatting and sifting through magazines. It was about noon when they called me back. They did a biophysical/ultrasound and a NST and everything looked good. I was relieved that all was well with baby and figured I would be going home soon. While waiting for the nurses to come back in and start the discharge process, I started to feel some contractions. Braxton hicks had been keeping me company since about twenty-five weeks, so I was very familiar with those, but these felt a little different. Monitors were still strapped to my stomach, and the nurses had noticed the contractions as well and one came in to check me. I was dilated to one centimeter, which wasn't anything to get too excited about, but something considering I wasn't dilated at all a few days before. They decided to keep me there for a few more hours for monitoring, and ultimately to see if I would progress. Both my twins were breech, unfortunately, and had not changed position for several months, so we had a scheduled c-section on the books for mid-September.

Five o' clock rolled around and I was starving. All I had eaten before my doctor's appointment was a nectarine because I wanted the lowest weight possible to report to Kevin later that day. You see, we had this little inside joke going. Kevin enjoyed teasing me about my weight gain at doctor visits, you know since I was growing two babies and all, and it annoyed me to no end. Weighing less than him while being pregnant times two was my way of sticking it to him. Fortunately for me, I weighed in at two pounds less than him that day, but consequently I was starving, and not in the best of moods.

An hour passed, and they checked my cervix again. I had progressed to two centimeters and they decided to admit me to the hospital. They took me up to a labor and delivery room and gave me an IV. I despise needles of any form, shape or size and so this was not my favorite. The hospital staff then informed me that I was not allowed to have anything to eat or drink until they decided if the babies were coming or not. As a first-time mom, I was unaware of this policy and it did not sit well with me. Apparently, an IV was drink enough and my horse of an appetite would have to thrive off it. They kept me strapped to monitors which were charting each contraction along with both baby's heart rates. My doctor was off for the day and the doctor on call, who I had never met, would make a decision by midnight.

The contractions were a little uncomfortable but bearable. As the night waned on my mood got worse and worse. I was really upset. I was being fed so many mixed messages by the hospital staff, from "you're progressing, so you should stay," to "not sure if you are in labor so we are going to wait," to "you can't eat or drink because you might or might not be in labor or be having these babies." It felt like a torturous mind game that not only drove you crazy but kept you hungry and tired. We waited and waited for midnight to come and lo and behold although I progressed to three to four centimeters, the on-call doctor didn't feel comfortable making a decision. He wanted us to wait for my doctor to come in the morning, and let him decide instead. I was famished and exhausted and extremely ticked at this point. I really just wanted to go home. The nurses seemed to be on my side, and they tried to lighten the mood by ensuring Kevin and me that the girls were coming that day. They wrote "Happy Birthday Brenna and Brooke" on the whiteboard. My mom noticed how upset I was and asked a nurse if they could just let me have something, anything to curb my appetite. Fortunately, the nurse had mercy on me and I had a late night meal of beef broth and apple juice.

The rest of the night and early morning hours were spent at the hospital, me on the bed and Kevin on a cot. We attempted to get some sleep, but it proved unrealistic. The room was fairly dark, and quiet, but there were lit screens, the random sounds of machines, and the occasional noise coming from people on the other side of the door. This was no hotel room. A few times I drifted off to sleep, but the babies kept moving, causing the monitors to lose their heart rates, and a nurse would come in to readjust the straps.  These three tightly wrapped monitors had been cinched around my contracting belly for hours. When they would move them I could see an indent in my stomach from where the round disk had been.

When seven o clock rolled around, I gave up on the idea of sleep and we both waited anxiously for my doctor to arrive. A nurse stopped in and let us know that the doctor was in the hospital doing his rotations and that he would be with us shortly. We were so relieved to know an end to all of this was in sight. Finally, we could get some answers and have some sort of a game plan, finally! It was about eight AM when there was a quick knock on our door and my doctor entered the room.  Without even checking me he asked, "How does a nine AM c-section sound?" His words were golden, he was like the knight on a white horse coming to save us. All the wait seemed worth it. We excitedly agreed, and the preparations began.  There were forms to sign and a clothing change for Kevin, and I said a final goodbye to my lopsided belly. Kevin left and would meet me up with me soon. It was time. I took a deep breath and they began wheeling me into the operating room.

I was nervous all of a sudden, freezing and shaking. I knew everything would be ok (I had a blessing previously) but nevertheless major surgery scared the heck out of me. I hummed a Child's Prayer in my head to keep myself calm. I didn't even feel the spinal, my mind was somewhere else. I held Kevin's hand as they began and we looked at each other, anxious and excited. I heard the first cry at 941am, it was Brenna who came bum first as Kevin witnessed. The cry was surreal to me but it was so amazing to hear. I think they showed her to me briefly and then she was gone along with Kevin who was wildly snapping pictures. I was suddenly alone on the chopping block.

Brooke came a few minutes later at 943am and I laid there extremely sedated waiting for the next glimpse of my girls. Kevin brought them over one in each arm. They were wrapped in blankets with little beanies on their heads. I remember trying to touch their faces and then they were gone. 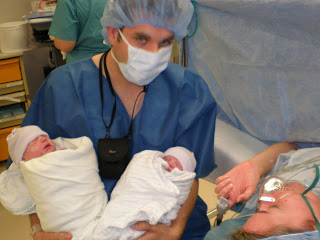 I heard the staples going in but didn't feel a thing. Next thing I know I am being wheeled in to our recovery room and there were my girls. I look over at Brooke and am amazed at the resemblance in her face. I remember thinking "Hello Reed" (my FIL) as I looked at her. Then I looked at Brenna and tried to distinguish who she looked like but I couldn't quite put a finger on it. They were both so cute and tiny, and had heads full of dark hair. I got to hold Brenna for the first time while they were bathing Brooke. A few minutes later they told me that Brooke was having a hard time breathing and would need to go to the NICU. As I watched her I could see that her tiny chest was heaving with each breath. My motherly instincts kicked in and I had a million questions but they would have to wait. Kevin followed as they wheeled Brooke away to the NICU. My Mom and MIL came in to visit, they hold Brenna and then left to see Brooke in the NICU. About an hour later my room was ready and they wheeled me to the NICU so I could see Brooke first. She was surrounded by small cords and had an iv. It was hard for me to see her this way. I finally got to hold her for the first time. I felt a whirlwind of emotions holding both of my girls for the first time, I realized that things are never the way you picture them to be. I was extremely exhausted, sleep deprived and consumed with these sweet little babies that were mine.