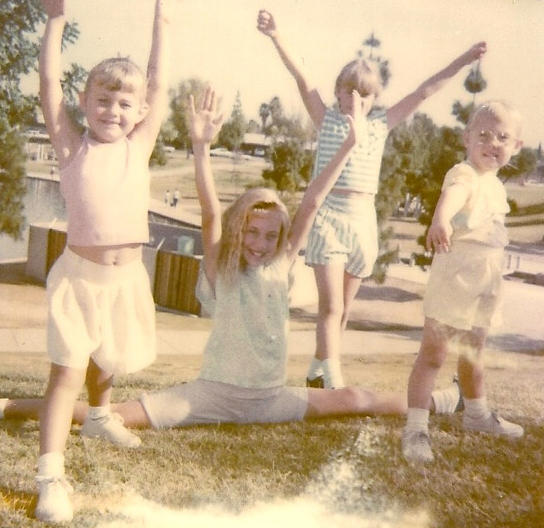 Despite what others may say, growing up in Arizona isn’t all bad. The weather is gorgeous from November to April, nearly half the year if you are part of the cup-half-full club. For six months we kids lived outside until dusk; collecting every last speck of daylight, and storing it in our minds for summer.  We would need it while we were running barefoot across scorching sidewalks and singeing our bottoms on black rubber swings. When the asphalt radiated heat like the coils of a blow dryer, we would need a reminder that it wasn’t permanent, because it was easy to forget. Once May arrived, the heat was home, its roots firmly planted in the desert soil.  We all knew it, living it was the harder part.

Air conditioning in the valley of the sun is a gift from the gods, though some may say you have to sell your soul to afford it. When it’s a crisp one  hundred degrees by sun up, the AC unit is in an all day uphill battle to keep the house cool. This means dollar amounts that at times seem to be competing with your mortgage.  In our family, not everyone was interested in sacrificing that much, and so less expensive cooling alternatives were brought in to play. For several summers, only swamp coolers were used in our home at night. Success was soon evident in the lower electricity bills, but consequently, our rooms began to resemble an Indian sweat lodge.  Unhappy with the discomfort at bedtime, we kids were forced to think outside the box for potential sources of relief. Beating the heat turned into a game, and we were quite creative at how we played.

My younger sister Tina and I shared a room, and often a brain. I remember stuffing our bathroom sink with silk nightgowns, one mint, one peach. We would run the faucet until they were drowning in water and then wring them out. Once on, the wet fabric fused to our bodies, and we were set for the night.  Spray bottles were another tool we used regularly. I was quite generous in my application, spraying water up and down my bed sheets and pillow. If that felt like too much work I just threw large cups of water directly onto the bed.  Some nights, none of it was quite right, and I would make my way to the hallway, pillow in hand. The cream and brown tile provided a consistent chill up against my skin and was always reliably cooler than the air. Our search for the next best thing in organic, homemade cooling continued.

One night, while my sister Tina and I were readying for bed, my eyes met a foreign container on one of the bathroom vanity shelves.  Normally, my seven-year-old mind didn’t put much thought into packaging that didn’t tout something artificially dyed and filled with sugar, however, the blue bold words “Icy,” seemed to hold just as much power. I had no idea what it was, or what it did, but I very much knew what the term “Icy” meant. Check mate.

Soon it was bedtime, lights were out, and everyone had been successfully herded into their assigned rooms. In the dark silence, I retrieved the small plastic container from the bathroom and brought it into our bedroom softly shutting the door behind me.  We sat on our bed while I excitedly screwed off the lid and peered in at our winning game piece.  Then, one at a time, we took our small hands, scooped out the white creamy substance, and began rubbing it all over our bodies and faces. Within a few minutes of application, we were transported to the arctic, coated in an icy coolness that put waterlogged pajamas and cold tile to shame. It was heaven in a bottle.

And then just as any good fairy tale goes, the requisite opposition has its dreaded turn on stage, and after heaven, hell naturally follows. Something was horribly wrong. Confusion painted our faces as the frosty bliss had somehow turned into fire. Burning. Everywhere. Poor Tina had gotten some of the cream near her eyes, and she began screaming and crying, while I joined her in a chorus of confusion and pain. Moments later, mom came running in, only to find us on our bed, writhing in agony, an open container of Icy Hot perched on our dresser. She quickly threw us both into the bathtub and began to wash the burning ointment off our bodies.

Such an experience doesn’t leave your memory, not even after twenty-five years. At the time it was the worst possible outcome for a well-intentioned child, but now I can laugh and revel in the hilarity of it all.  I came away with three valuable life lessons: There is wisdom in reading and understanding the ENTIRE name of an unfamiliar product BEFORE you choose whether or not to rub it all over your body. Icy Hot is used for muscle pain and is NOT a skin coolant. When you rush to make a commitment, after only understanding your choice halfway, you could very well get burned.