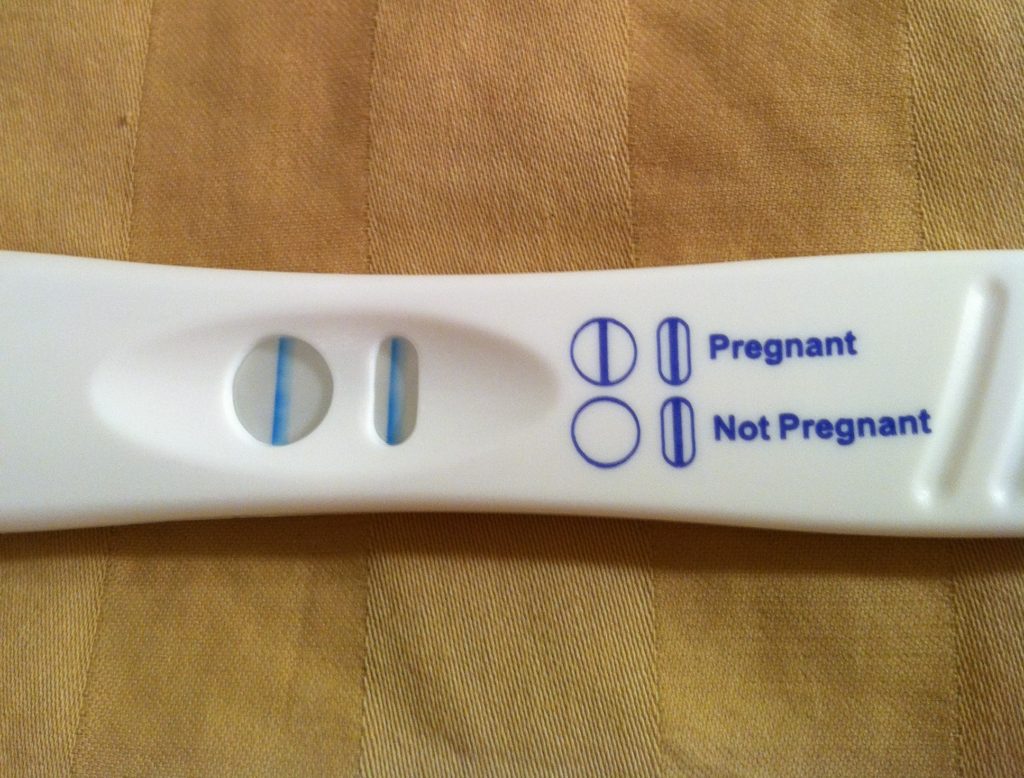 A few months ago, Kevin and I felt inspired that it was time to add another child to our family. Originally we had planned to wait until we bought a home that would have a 4th bedroom (a year from now), and Kevin got another promotion so we would be bringing in more money. Plus we figured we could use some more time since our dear Dallin has proved to be a handful and still struggles at times in the sleeping department.  So despite our concerns we took a leap of faith, and on April 27th I woke up to an unexpected temperature spike. My temperature had dropped the morning before so I wasn’t expecting this cycle to be “the one”. Without saying a word to Kevin, I ran to the bathroom and was literally shaking as I took a pregnancy test. I was worried that Kevin noticed my weird behavior, or was wondering why I was taking a while in the bathroom, but he was busy getting ready for work. Heck, a little weirdness from me is quite normal I guess. A very faint blue line appeared on the stick after a minute and I was shocked but excited.

One of the girl’s friends had just arrived at our door so we could drive her to preschool that morning, so I hurried to greet her and her mom. Once the kids were all taken care of I began trying to get Kevin to go into the spare bathroom so he would see the test on the sink. I noticed his hair wasn’t done yet, so I said: “Aren’t you going to put some gel in your hair?” It didn’t work. A few minutes passed, and I said, “Oh Kev, there’s this big fly in the spare bathroom!” “Could you go catch it?” Kevin is the king of fly-catching, so I figured that would get him to move towards the bathroom. It worked, and he began searching the bathroom for “the fly.” Kevin came out and said he couldn’t find it. I sent him in once again and went with him this time. “I don’t see anything,” he said, and then I pointed to test on the sink. He was confused and looked at the test, and then back at me. “What?” “I don’t get it.” It took a minute and then he actually studied the item on the sink. Then he looked at me with wide eyes and said: “YOU ARE PREGNANT????!!!!”  Apparently, he thought the pee stick was a thermometer the whole time. He wasn’t expecting it either.

We waited until Mother’s Day to tell the girls because we figured once they knew we had to be fine with them telling people. They have been really excited about the thought of having another sibling, especially a baby sister, so it was hard waiting for 3 weeks to tell them. They are both really excited although when we told Brooke the news she kept saying “no you’re not!”, “you aren’t having a baby!” over and over. She wasn’t buying it at first. Now they pray that it will be “a girl, or just twins,” although I’m sure they will love it if it’s a boy too.

I’m 7 weeks now, and it’s been an interesting pregnancy so far. I’ve had some challenges I haven’t experienced before, and this time just feels really different. I felt so sure and confident when I got pregnant with Dallin. I had a plan, and I was “gun ho” about everything.  I feel quite the opposite this time. I’ve felt down at times and have questioned whether we made the right decision.  My Mom told me something that has helped me a lot. She said that Satan is constantly working against us, and doing whatever he can to attack the family unit. He doesn’t want us bringing children into this world and teaching them the Gospel. He wants us to be miserable and to only see the negative side of things. I have to remind myself of that a lot. Along with the struggles I’ve had, I’ve seen blessings as well. As soon as we were open to having this baby, there was an opening for a website designer job at Kevin’s work. This was the position he has been working towards for a long time! He applied, and got the job!  I also think that the fact that we got pregnant, and so soon meant that this baby was supposed to come into our family at this time and not later as we had planned. Just being able to get pregnant is something I don’t like to take for granted, and it truly is a miracle in itself!  Amidst uncertainty, it’s good to know that Heavenly Father has a plan for us and this new baby, and I am very grateful for that.