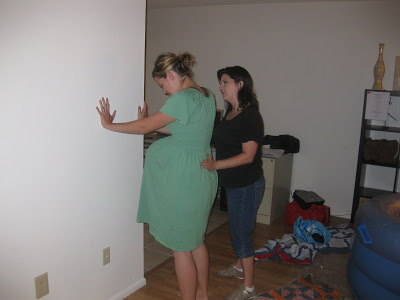 The following italicized information comes directly from the DONA website: The word “doula” comes from the ancient Greek meaning “a woman who serves” and is now used to refer to a trained and experienced professional who provides continuous physical, emotional and informational support to the mother before, during and just after birth; or who provides emotional and practical support during the postpartum period.

Some of the benefits of having a doula for your birth: “Numerous clinical studies have found that a doula’s presence at birth tends to result in shorter labors with fewer complications reduces negative feelings about one’s childbirth experience reduces the need for Pitocin (a labor-inducing drug), forceps or vacuum extraction and cesareans reduces the mother’s request for pain medication and/or epidurals.”
When I first heard the word “doula,” I had no idea what it meant. It wasn’t until I had joined the local birthing community that I learned who they were and what they did. Once I heard birth story after birth story involving a doula, I knew that I wanted one for Dallin’s birth. Fortunately, there are TONS of wonderful doulas in the valley to choose from. I interviewed three and then chose the one I felt was the best fit for me.Here are some of the benefits I had because I had a doula.

Support From Someone With Experience
Kimberly had attended over 200 births in the valley when I interviewed her. Most of these births were unmedicated, but she had the ability to support whatever kind of birth we wanted. She had supported moms through C-sections, VBACs, hospital and home births. With being a RN and attending so many births, she knew a LOT about what to expect with birth. I felt confident that she knew what was normal, and what wasn’t. So while I made sure to educate myself in childbirth, it was nice to have another educated person on our team. Kimberly also knew different ways to support moms through their labor. She was familiar with all the tools available to use during birth. Kimberly had lots of experience using birth balls, heat packs, counter pressure, birth pools, massage, and changing positions. Knowing that I would have someone so experienced on my birth team gave me confidence that I would be successful.